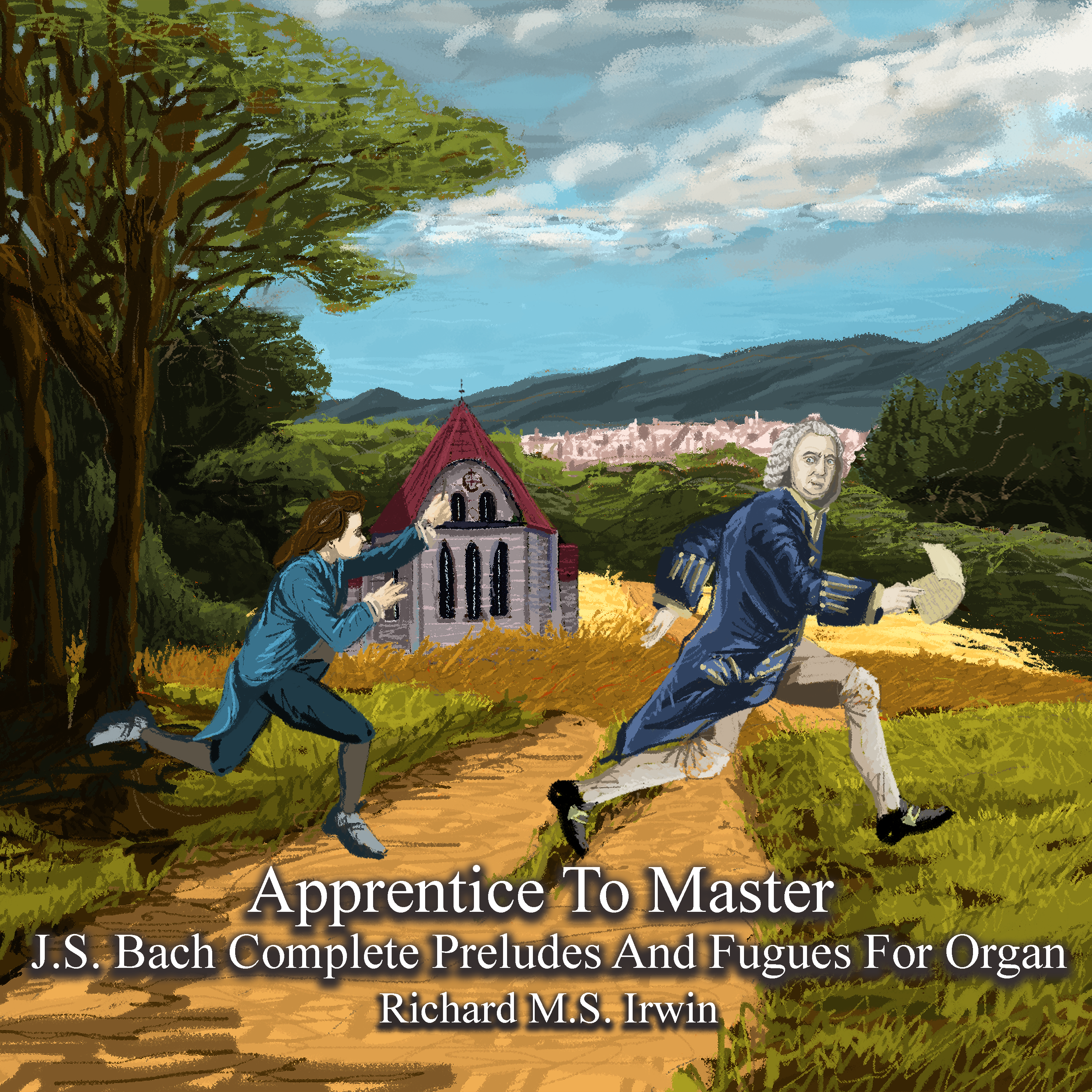 This complete collection of the surviving Preludes and Fugues for Organ by Johann Sebastian Bach (1685-1750) follows Bach’s progress at developing the form from c.1703, when he was first appointed as a Church Organist aged eighteen, until he has become the supreme authority in his craft, the last dating from c.1739.

This double album does not include other church organ works, for example, the Toccata and Fugues, etc; these are for another project. The CDs do not follow the order of BWV catalogue numbers, but instead are in approximate date order: from the early BWV 531 (written for the church in Arnstadt) to the last, BWV 522 (written at Leipzig). This means we can follow Bach’s progression from youthful but skilled apprentice to master.

As an organist in an early 17th century German Lutheran Church, Bach was expected to compose and play his own music, and the prelude and fugue were intended to impress and get the congregation into the right mood prior to the precentor starting the liturgy. Some are exuberant and playful, others contemplative and thoughtful, some profoundly moving. Bach had a sense of fun and offers us compositions which require demanding keyboard and pedal skills, many with incredible, original rhythms that may take the listener by surprise.

It is likely that many more of these works have been lost and it is rare for those that survive to have an original manuscript. The works are performed by Richard M.S. Irwin on a virtual Garritan Pipe Organ, which has many features of a north German Organ of Bach’s time and includes many stops with which Bach would have been, including thunderous 32 foot bass pipes!

This double-album is dedicated to His Majesty King Charles III on the occasion of his coronation 6th May 2023.

The Music in Context

In German Lutheran churches during Johann Sebastian Bach’s lifetime (1685-1750), preludes and fugues were popular forms of music and were used in religious services to create an atmosphere of solemnity and reverence. The prelude was used to introduce the musical theme and set the tone, while the fugue was used to develop the musical idea and create a more elaborate musical form.

Bach wrote his Preludes and Fugues for Organ right from the start of his career as a church. This was expected of him as part of his duties during the Sunday Lutheran Services where music played a central part in the towns and villages of northern Germany. He was not expected to use the compositions of other composers, few of whom could match him for mastery of his art (listen to Baroque Miniatures For Organ for comparison).

Even his elder brother, Johann Christoph Bach (1671-1721) who fostered Bach from the age of 10 after the death of his parents, apparently denied the boy access to works probably collected when Johann Christoph was a pupil of the famous Johann Pachelbel (1653-1706). This despite Bach secretly copying them by moonlight, or so the story goes!

Most of the manuscripts of the Prelude and Fugues that still exist are copies from Bach’s pupils. The dates of composition appear to be from as early as 1703 when Bach was 18 until at least the late 1730’s if not even later still. In a way, we have a lifetime of musical development to explore.

Bach was born and lived most of his life in Thuringia, a state of north-central Germany at the time. We need to understand that Bach’s world was a poor one, a Germany still in recovery from the horrors of The Thirty Year War (1618-1648) which was one of the longest and most brutal wars in human history, with more than 8 million casualties from military battles, famine and disease caused by the conflict.

Bach was a determined youngster who was beset by personal tragedy, but he wrote “I worked hard. Anyone who works as hard as I did can achieve the same results.” . . . We might doubt this, but the sentiment is central to Bach’s character, and we can hear the hard work from the very earliest pieces to the much later and mature.

He benefitted musically as a child from the Latin School system set up by Luther, where music in terms of the Lutheran Chorales played a central part of daily singing exercises and games of musical invention and harmony were created around musical canons, often cited as the origin of the fugue.

These same chorales were sung in church on Sunday, the organist playing a chorale prelude before the congregation sung the words, either accompanied or unaccompanied depending upon the church.  Luther’s emphasis was on the meaning of the words and installing those words into the congregation.

The Preludes and Fugues, were, I understand played at the beginning of the Sunday service prior to the Precentor commencing the liturgy.  Complaints to the local Consistory Court in Arnstadt about the length of these were sometimes made against Bach as being too long, or too short! Certainly, some of the later compositions would have been enjoyed, even if too long! Such continuous composition in a single movement was not surpassed until Beethoven.

The pieces are full of emotion, of joys and of sorrows as can be heard in the great crunching chords.  The pieces are full of dance rhythms and Bach was happy to experiment and achieve some really impressive affects.  I hope throughout, I have achieved in my playing the central sense of dance.

Thank goodness for German organ building, or we would never have had Bach! The tradition of organ building in northern German was a strong one, going back at least a century before Bach and mainly based on the Werkprinzip, where the “work principle” might be defined as “the principle of balance between divisions.” Where the divisions where the different sets of pipes.

In seventeenth-century German organs from the north, the nature of this balance had become standardised. Typically, an organ of this time would consist of:

Bach was involved with installing new organs from an early age and the major innovation introduced at the time was the move from modal to well-tempered tuning. This in turn allowed the writing of pieces in every key.

In choosing my organ and registrations I have used the virtual Garritan Pipe Organ that has samples from similar sets of pipes. However, rather than restrict myself to a purely Baroque combination of stops I have allowed more modern stops to join the throng as I felt the purely Baroque too restrictive and it became a strain on the ears. 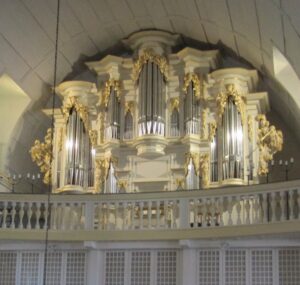 A city fire in 1581 destroyed the church of St. Boniface in Arnstadt and a baroque, single-nave “New Church” was built upon the old foundation in 1683. It was later renamed after Bach on the composer’s 250th birthday. Johann Friedrich Wender from Mühlhausen built the organ for the place of worship between the years 1699 and 1703.

The 18-year-old Johann Sebastian Bach was responsible for the final inspection and was the organist until 1707. However, despite many repairs and alterations, this original organ eventually became unplayable and was replaced by a Romantic Steinmeyer organ in 1913. Luckily, in 1990, Gottfried Preller, the church music director recommended a comprehensive reconstruction of what was left of the Bach organ (320 of 1252 original pipes). It is now this reconstructed organ that again fills the church with its baroque splendour.

As previously stated very few of the scores for the Preludes and Fugues exist in Bach’s own hand and most were copied by pupils. It is therefore inevitable that some errors would have crept in. The way I have approached the scores is to take at least two versions where possible and compare them where I think there may be errors.

The main test for truth, however, has been the ear which would complain if unhappy notes were played.  This has led to some minor adjustments in the counterpoint in a few places, a short reconstruction of a missing 2nd voice fugue line for a bar and a half and an extra suspended chord at one ending. I will leave the listener to spot them, agree or complain.  To me they sound right.

Other changes include additional ornamentation in the parts where the music implies they should be there, but are omitted from the scores.